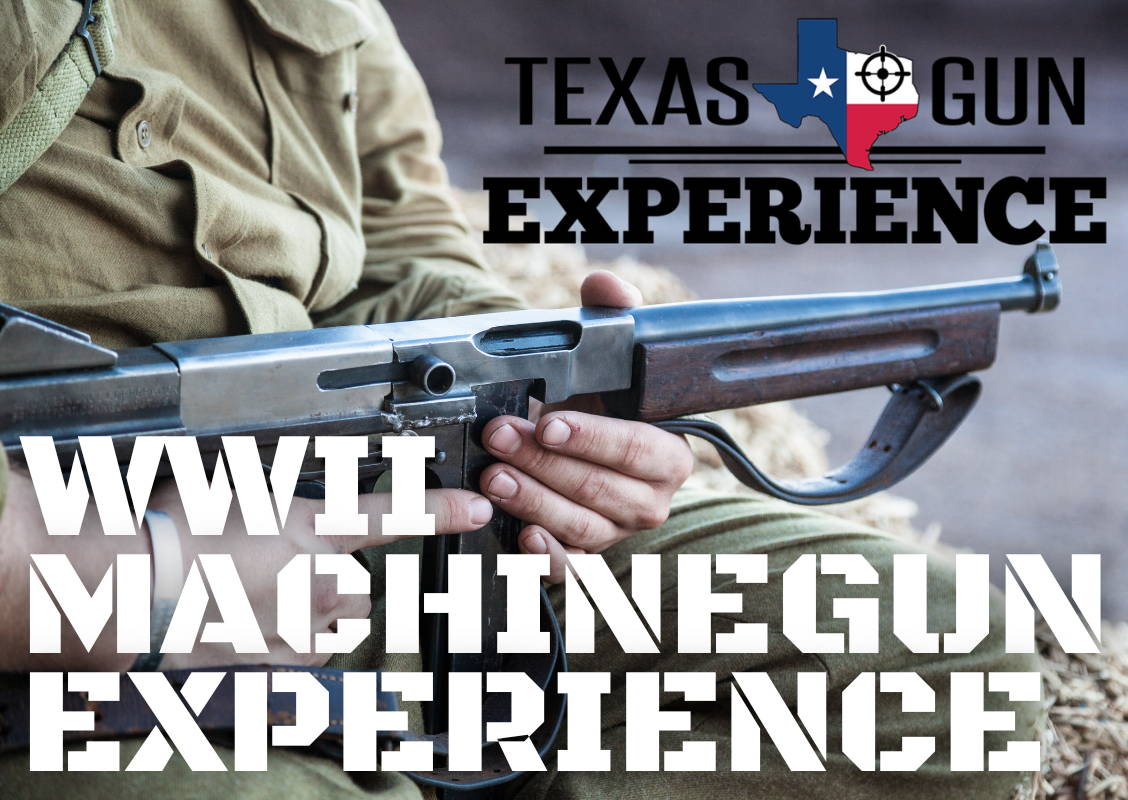 The second war to end all wars was filled with firearms that revolutionized warfare as we know it. Step back in history and feel the wood, steel, and grease that changed the world! If you enjoy movies like Saving Private Ryan, Thin Red Line, or Band of Brothers, then our World War Two machine gun package is right for you! This Texas Gun Experience package includes everything you need to experience some of the most prolific firearms used throughout the Second World War, by countries such as the United States, Germany, United Kingdom, and more! Package includes five machine guns, target, one magazine or belt of ammunition per firearm, hearing, and eye protection. 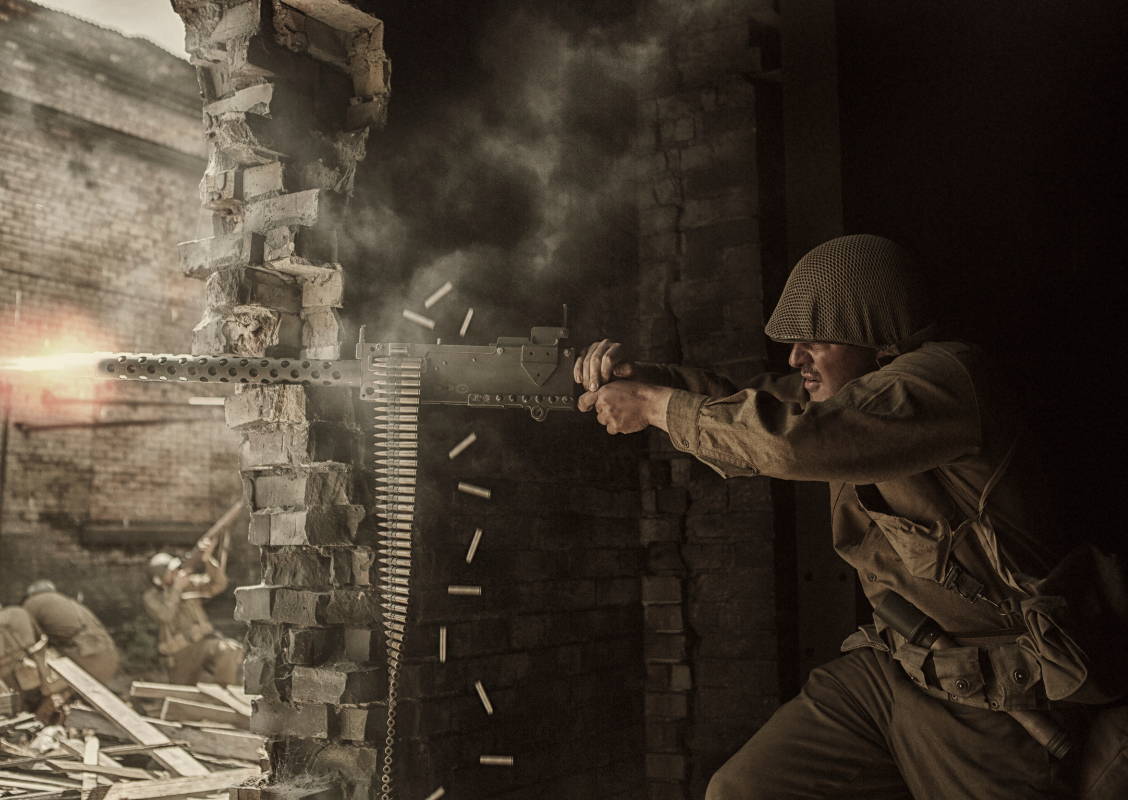 The M1919 Browning is a .30 caliber medium machine gun widely used during the 20th century,
especially during World War II, the Korean War, and the Vietnam War. An air-cooled development of the
standard US machine gun of World War I, the John M. Browning-designed M1917, the M1919 saw
service as a light infantry, coaxial, mounted, aircraft, and anti-aircraft machine gun by the U.S. and many
other countries. Although it began to be superseded by newer designs, such as the M60, in the latter
half of the century, it remained in use in many North Atlantic Treaty Organization (NATO) countries and
elsewhere for much longer. The M1919 was manufactured during World War II by three different companies in the United States; Buffalo Arms Corporation, Rock Island Arsenal, and the Saginaw Steering Gear division of General Motors.
Manufacturer: Browning
Caliber: 7.62 x 51 mm
Weight w/o belt: 32.5 lbs
Effective range: 1800 m (1968 yds)
Rate of fire: 500 RPM

The Browning Automatic Rifle (BAR) is a family of American automatic rifles and machine
guns used by the United States and numerous other countries during the 20th century.
The U.S. Army used the BAR as a light machine gun, often fired from a bipod.
Although the weapon did see some action in World War I, the BAR became standard issue in the US
Army in 1938, when it was issued to squads as a portable light machine gun. The BAR saw
extensive service in both World War II and the Korean War and saw limited service in the Vietnam
War.
Manufacturer: Browning
Caliber: 30-06 Springfield
Total length: 47 in. (1,194 mm)
Weight w/o magazine: 15.98 lbs
Muzzle velocity: 2,822 fps (860 m/s)
Effective range: 1,372 m (1,500 yds)
Maximum range: 4,600 m (5,000 yds)
Rate of Fire: 600 RPM 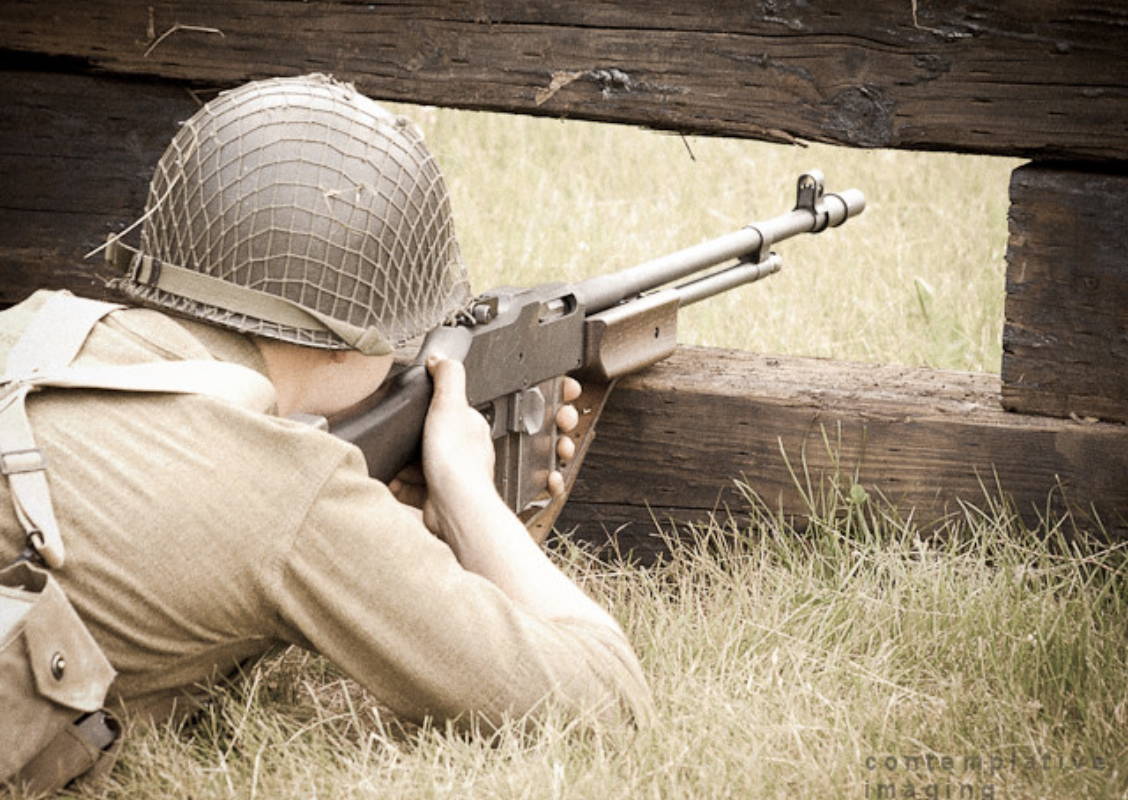 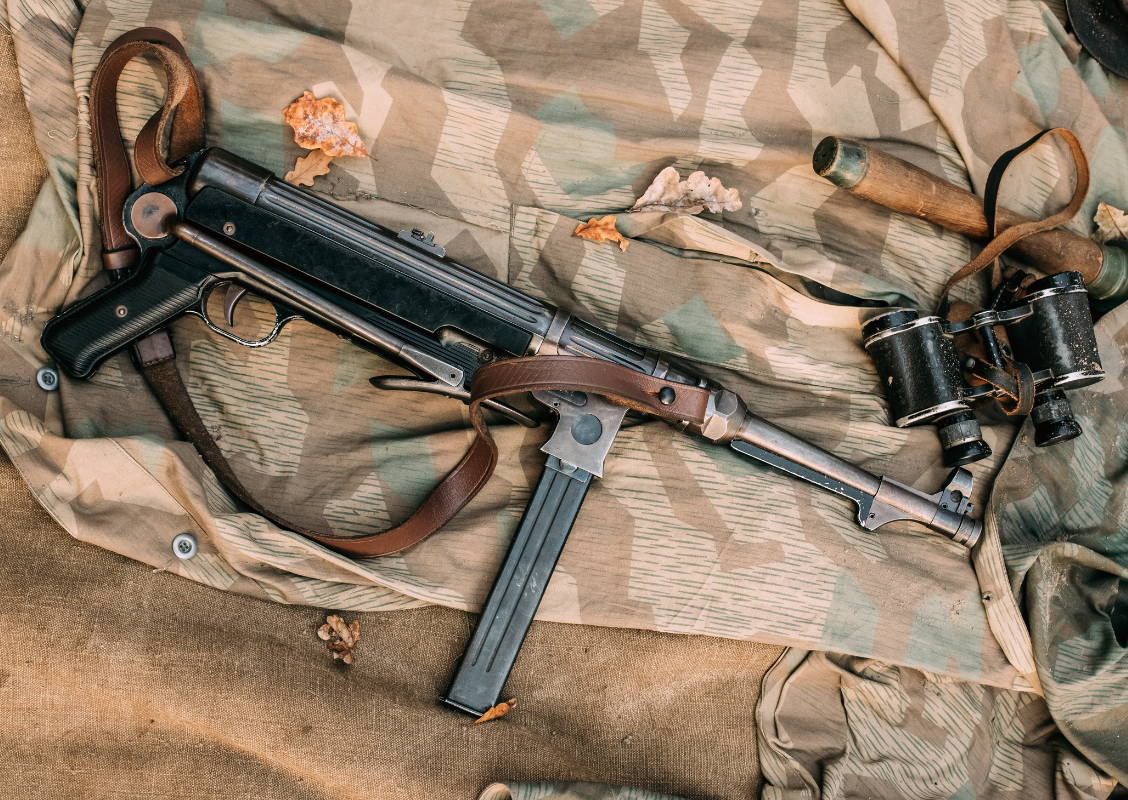 At the outbreak of World War II, the majority of the German soldiers carried either Karabiner 98k rifles or MP 40s, both of which were regarded as the standard weapons of choice for an infantryman. However, later confrontations with Soviet troops such as the Battle of Stalingrad, where entire enemy units were armed with PPSh-41 submachine guns, the Germans found themselves out-gunned in short range urban combat which caused a shift in their tactics, and by the end of the war the MP 40 and its derivatives were sometimes issued to entire assault platoons. Starting in 1943, the German military moved to replace both the Karabiner 98k rifle and MP 40 with the new, revolutionary StG 44. By the end of World War II in 1945, an estimated 1.1 million MP 40s had been produced of all variants.
Manufacturer: Erma Werke's Berthold Geipel
Caliber: 9×19mm Parabellum
Total length: 24.8 in. (630 mm)
Weight w/o magazine: 8.75 lbs
Muzzle velocity: 1,312 fps (400 m/s)
Effective range: 100-200 m
Maximum range: 250 m
Rate of Fire: 500 RPM

The MG 42 (shortened from German: Maschinengewehr 42, or "machine gun 42") is a 7.92×57mm
Mauser general-purpose machine gun designed in Nazi Germany and used extensively during the second half of World War II. Designed to be low-cost and easy to build, the MG 42 proved to be highly reliable and easy to operate. It is most notable for its very high cyclic rate for a gun using full power service cartridges, averaging about 1,200 rounds per minute compared to around 850 for the MG 34, and perhaps 450 to 600 for other
common machine guns like the M1919 Browning or Bren. This ability made it extremely effective in
providing suppressive fire, and its unique sound led to it being nicknamed "Hitler's buzzsaw".
Manufacturer: German
Caliber: 7.62 x 51
Operation: Recoil operated, roller lock
Capacity: Belt Fed
Weight: 25.5 lbs
Barrel Length: 20.9″
Rate of fire: 1,500 RPM 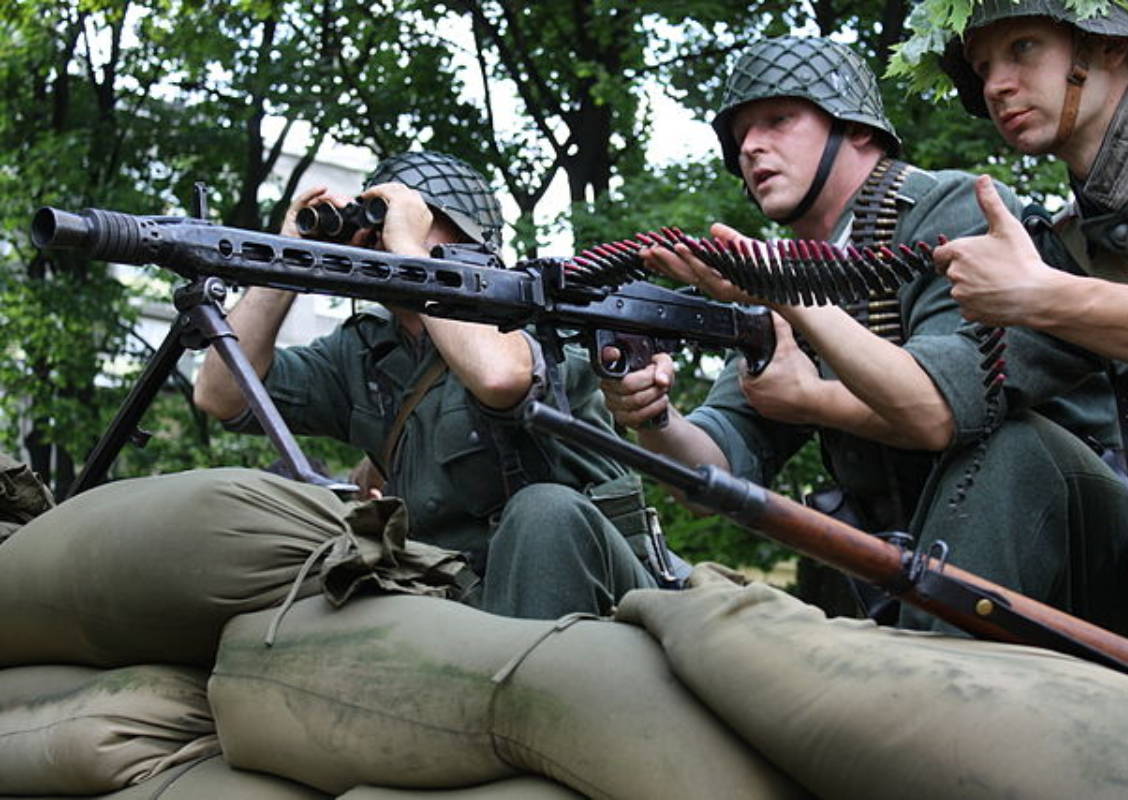 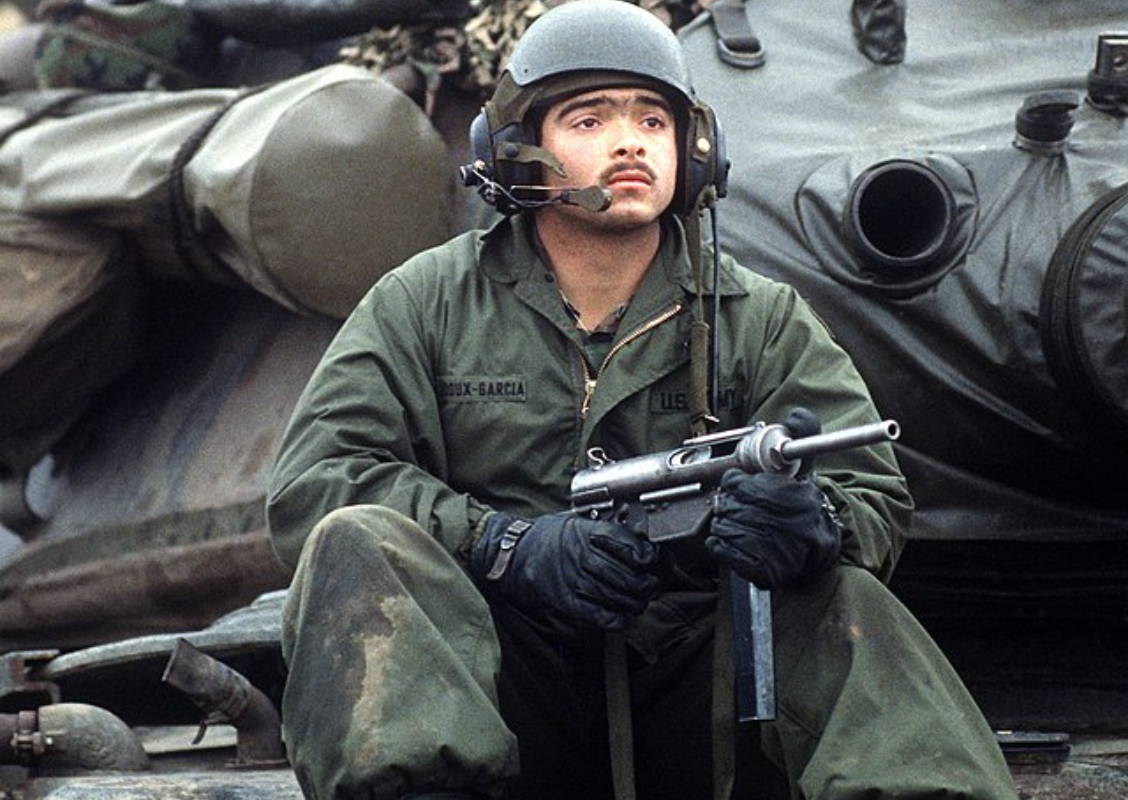 The M3 is an American .45-caliber submachine gun adopted for U.S. Army service on 12 December 1942,
as the United States Submachine Gun, Cal. .45, M3. The M3 was chambered for the same .45 ACP round
fired by the Thompson submachine gun, but was cheaper to produce and lighter, although, contrary to
popular belief, it was less accurate. This myth stems from a US Army training film portraying the M3 as
more accurate than its counterparts. The M3 was commonly referred to as the "Grease Gun" or simply
"the Greaser," owing to its visual similarity to the mechanic's tool.
Manufacturer: Ithaca
Caliber: .45 ACP
Operation: Blowback, open bolt
Capacity: 30 Round Magazine
Weight: 7.95 lbs
Barrel Length: 8″
Rate of fire: 450 RPM