And to fight that war, those military personnel needed weapons. Today, we’re going to talk about some of the most influential, or at least interesting, weapons used in World War II, including some that we have in our collection here at Texas Gun Experience.

The early twentieth century was a period of innovation, and weapons creation was no exception. So, to keep things from getting too out of hand, we’re going to focus primarily on infantry weapons, specifically the exploration of rifles, pistols, submachine guns, and machine guns in WWII.

In case you haven’t thought about World War II history since grade school, let’s kick things off by revisiting who the major players were.

On one side we have the Allies. The main three countries on this side were the United States, the United Kingdom, and the Soviet Union. On the other side, there’s the Axis, led by Nazi Germany, the Kingdom of Italy, and the Empire of Japan.

There were plenty of other countries involved, too, especially on the Allies’ side, though none with the level of contribution as the countries we just listed. 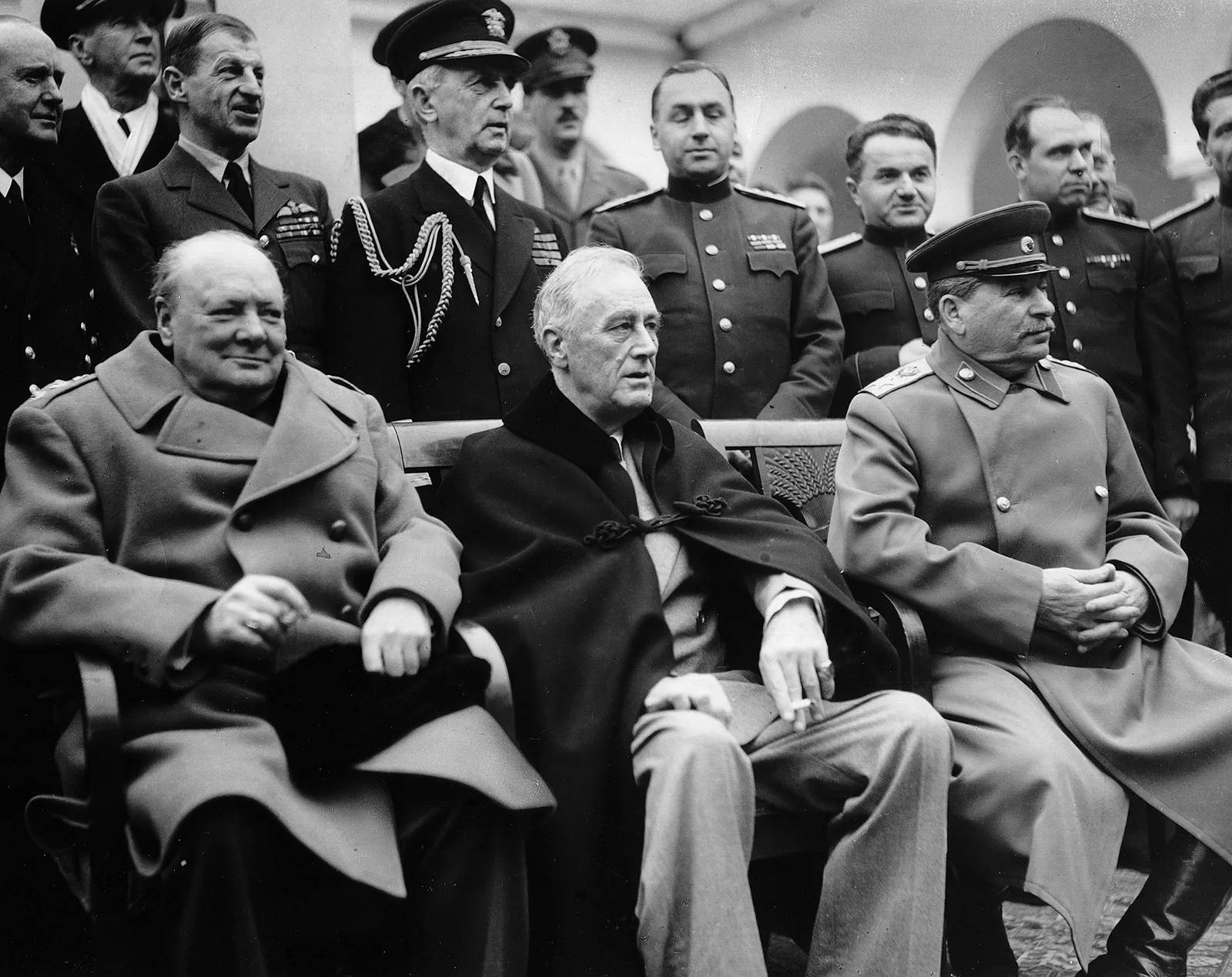 After the Mosin-Nagant, which we’ll talk about in a minute, the Lee-Enfield is the second longest-serving military bolt action rifle still in service. It was used by the British Army as well as the armies of other Commonwealth countries during both World War I and World War II. This rifle was well-loved due to its accuracy, speed, and reliability.
It was used on all fronts, but especially around North Africa, Italy, and the Pacific. In addition to the UK and the Commonwealth, Lee-Enfields were also used by a handful of other Allied forces and captured Lee-Enfields were also popular among Italian and German infantry regiments. 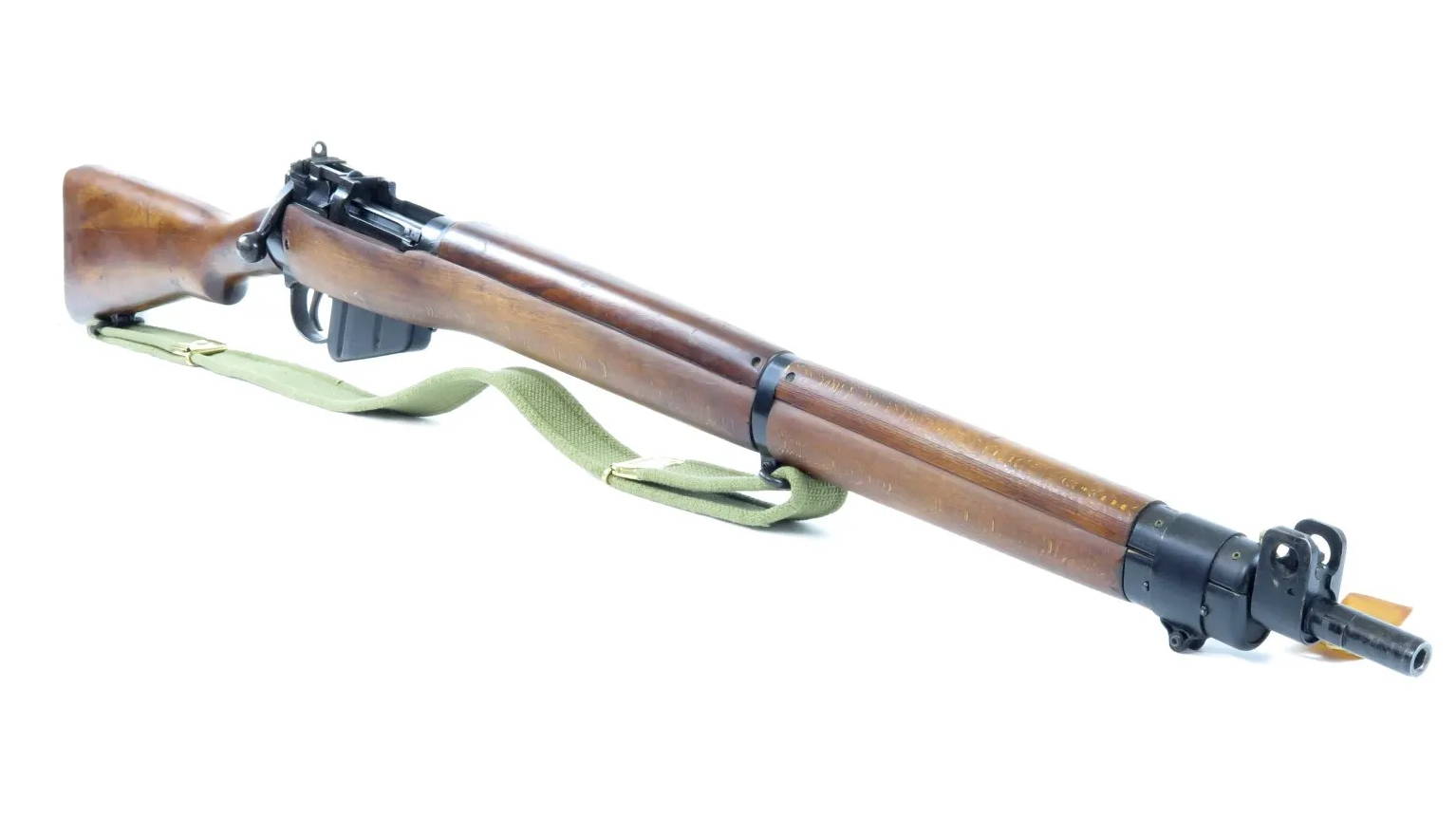 The Sten gun is perhaps the UK’s best-known World War II weapon, and it was born out of desperation and necessity. In 1940, the UK was facing some serious losses of equipment after the German occupation of Dunkirk. British troops needed a serious infantry weapon that could be produced quickly and at very little cost.
The Sten gun, with its easy-to-mass-produce design, fit that bill perfectly and it quickly began being manufactured all over Britain. It wasn’t the most reliable weapon, but it blasted through enemy infantry all the same. 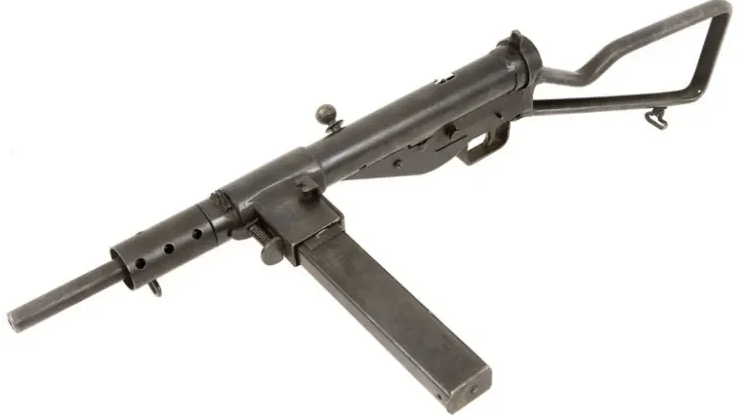 First for the Americans is the Browning M1919. This gun was used by the Allies in general, but most notably by the United States. The M1919 built on the design of the Browning M1917 but introduced an air-cooling system.
This medium machine gun was used for all kinds of purposes, including light infantry, mounted, coaxial, aircraft, and anti-aircraft uses. 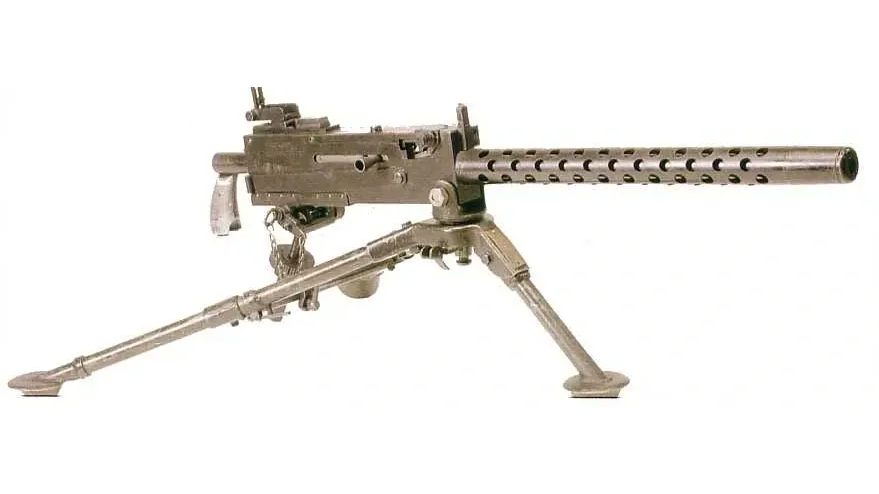 The M1918 Browning Automatic Rifle, better known as the BAR, was first introduced during the First World War, but it became a standard issue weapon for the US Army during the Second World War. This 30-06 caliber light machine gun was favored because it was portable but still incredibly effective, with a 1,500-yard effective range and a rate of fire of 600 RPM. 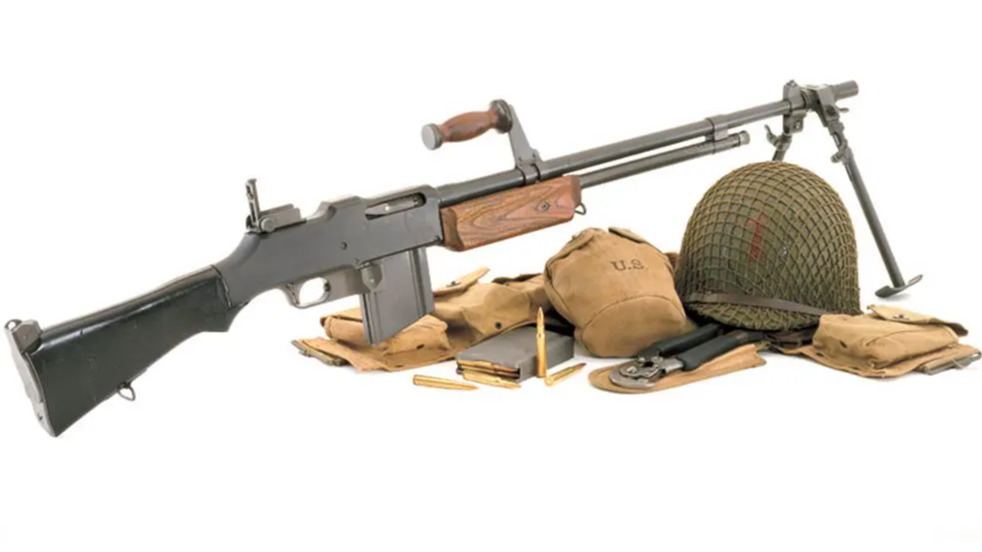 The Thompson Submachine Gun, also known as the Tommy Gun, was developed as a trench gun during World War I but persisted into World War II. Like many American-manufactured guns, it was used primarily by the US armed forces, but also by other Allied troops.
However, at the end of 1944, the Ithaca M3A1 “Grease Gun” was introduced, just in time to finish out the war. The Grease Gun was developed to be lighter and cheaper to produce than the Tommy Gun while still firing the same .45 ACP rounds. On the other hand, it was also less accurate. 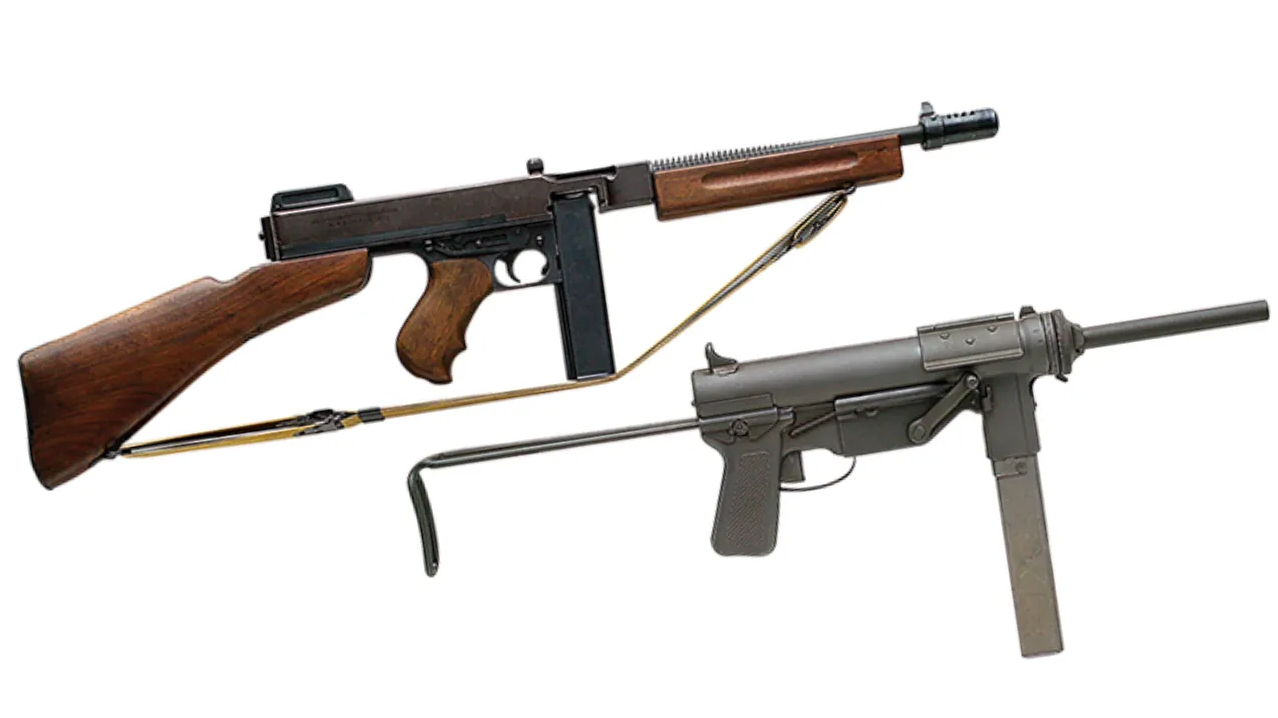 Semi-automatic weapons weren’t exactly common yet at the start of World War II, but that quickly changed after the introduction of the M1 Garand, the first standard-issue semi-automatic rifle. This rifle provided an important proof of concept for the semi-auto design since it was much faster than the bolt action designs used by Axis countries at the time.
Also, it could be outfitted with a bayonet or M7 grenade launcher, which is extra fun. That grenade launcher would shoot the Mk2 Fragmentation Grenade, also called the frag grenade or, due to its rigid body, the pineapple grenade. The frag grenade was also used as a hand grenade, so stabilizing fins had to be attached for use with the M7. 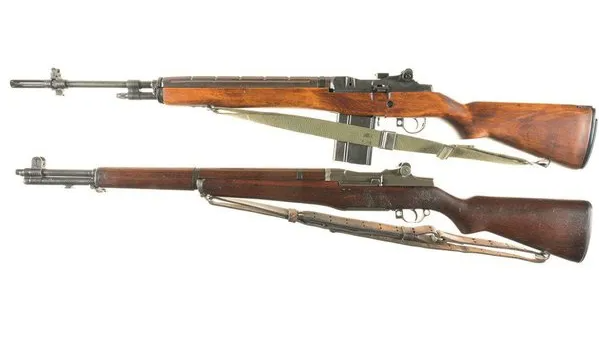 Moving on from American rifles, we get to what was probably World War II’s most iconic pistol, the Colt M1911, AKA the Colt Government. Another Browning design, despite the name, the 1911 is one of his best-known and most enduring designs. The 1911 is still in military service, is a popular choice for pistol competitions, and is just an all-around darling among firearm enthusiasts to this day. 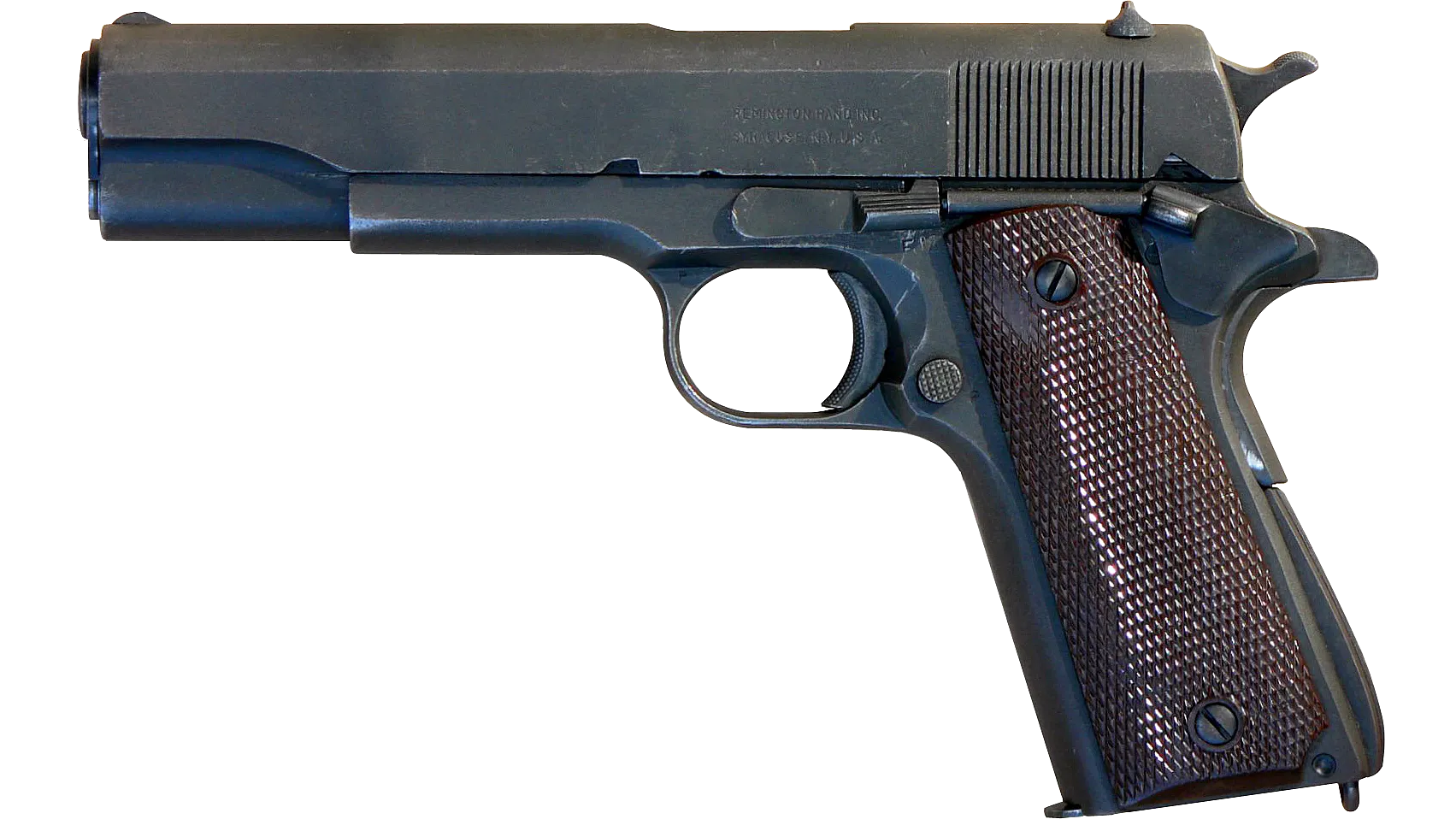 The Mosin-Nagant was the Soviet Union’s standard-issue rifle and featured heavily on the Eastern Front. It’s also one of the most mass-produced firearms to ever exist.
In addition to its use as a standard service rifle, it was also a favored sniper rifle and was used by many of the Soviet’s most successful snipers, which also tended to be some of the war’s most successful snipers.
The Finnish version was even used by Simo Häyhä, considered the deadliest sniper in history. Though, since all his kills were Soviets, the Russian Army was probably less than thrilled about that. 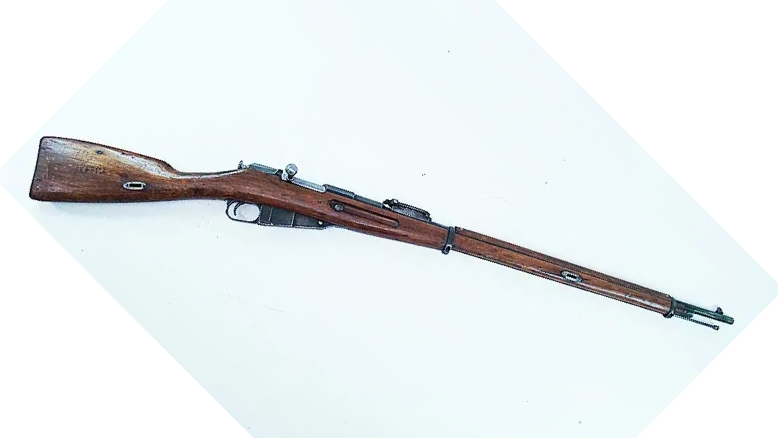 Italy wasn’t exactly well known for their World War II weapons, but there are a couple that we can hit on, like their standard-issue rifle, the Carcano M1891.
The M91 was a bolt-action rifle that saw service during both World Wars. Unfortunately, it wasn’t exactly a great weapon. To be fair, the rifle itself was okay, though not at the same level as those used by the US, UK, Germany, or Soviet Union.
The main issue was the inconsistent manufacturing of the 6.5×52mm Carcano round that the rifle used. The round wasn’t manufactured to a standard, and there was a great variation in the rounds used, even within the same clip. As a result, the rifle’s performance was unpredictable and inadequate, with inconsistent round dispersal and muzzle velocity that was impossible for shooters to account for from round to round. 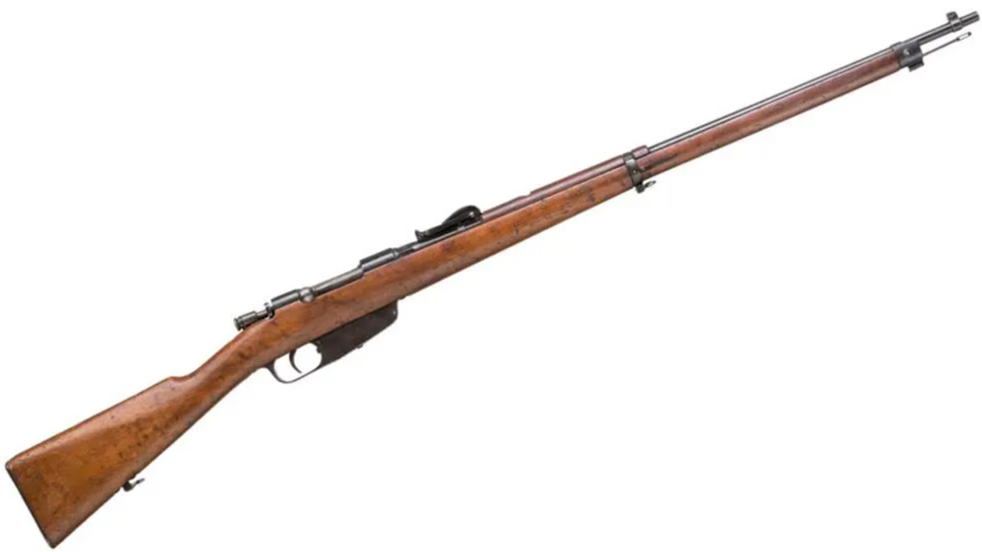 We can’t talk about Italian small arms without mentioning Beretta, and the M1934 was Beretta’s most widely used pistol during World War II. Beretta initially designed the M1934 when the Italian military was eyeing the Walther PP. Beretta didn’t want to lose out on the contract, so they designed a competitor.
The M1934 proved to be a very reliable, very easy to maintain pistol, but the .380 ACP round it used wasn’t as powerful as those used by other military semi-auto pistols at the time. It also had a lower magazine capacity with just 7 rounds. 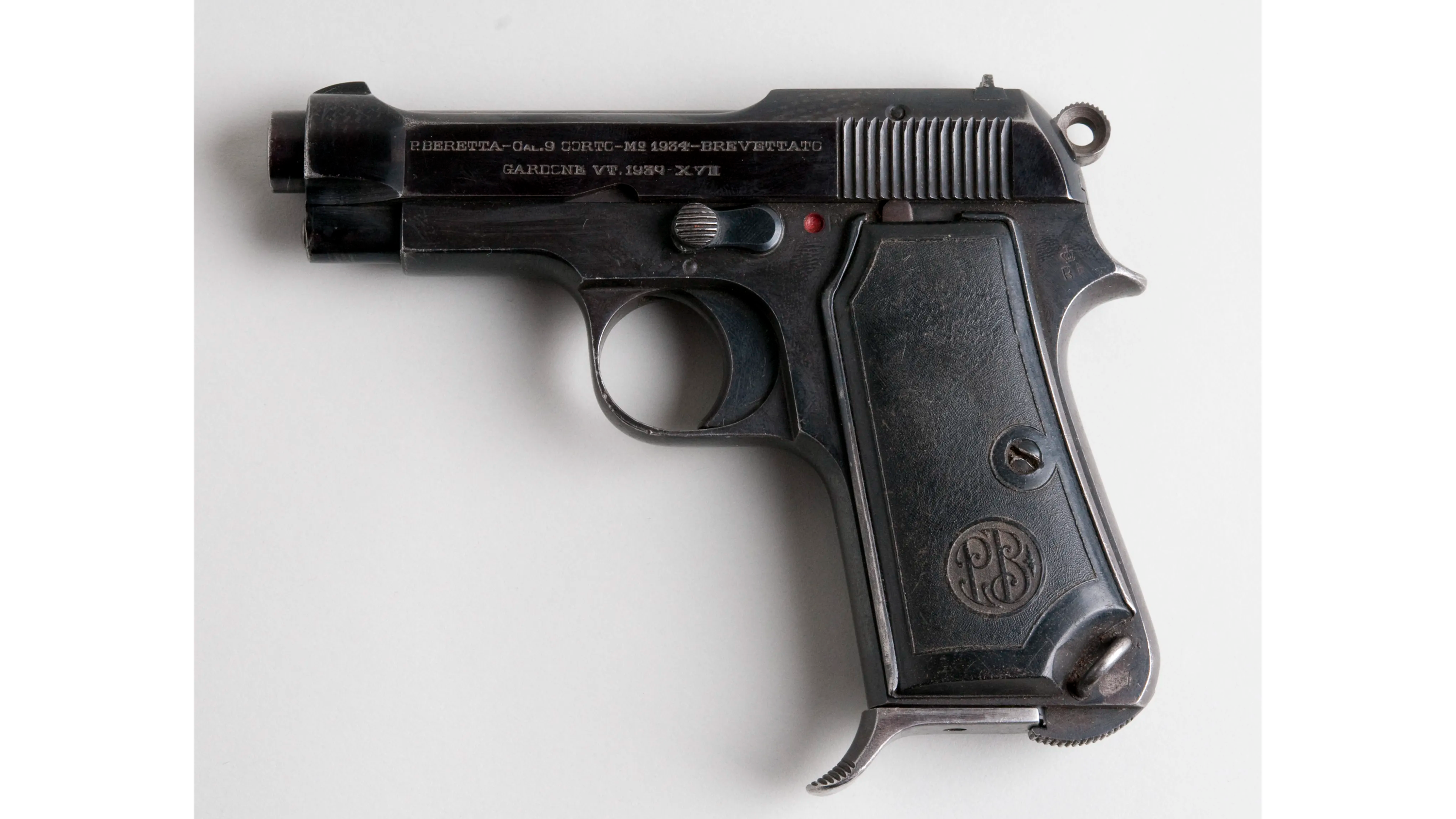 The Hi-Power is an interesting case because it was used by both Allies and Axis countries. Seeing how exactly that came to be requires us to look at the gun’s development.
The Hi-Power’s design was started by John Browning, as you may be able to guess. Unfortunately, Browning died in 1926, before the design was completed. Instead, it was finished in 1935 by Dieudonné Saive at the Belgian firearm manufacturer Fabrique Nationale, better known as FN.
Five years later, in 1940, Germany overtook Belgium, including the FN plant and began using the Hi-Power. However, shortly before, plans for the Hi-Power made it to the UK, who arranged for the Hi-Power to be manufactured for themselves and other Commonwealth forces in Canada. 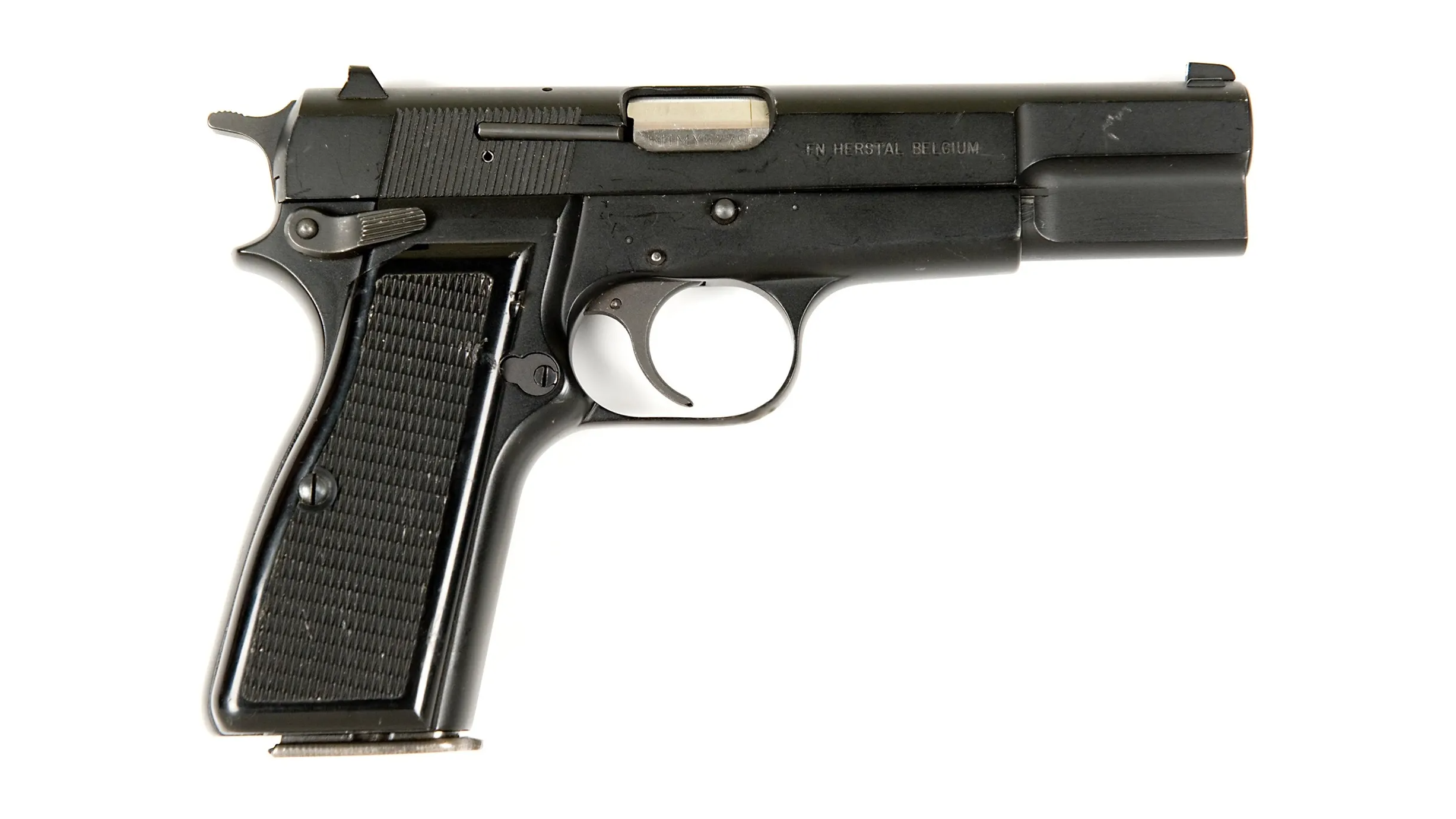 At the start of World War II, most German soldiers were using either the Karabiner 98k rifle or the MP 40. However, in urban conflicts with the Soviets, most notably in Stalingrad, German troops, especially those wielding the Karabiner 98k, were quickly outclassed by Soviet infantry divisions armed with PPSh-41 submachine guns.
This led the German military to start moving towards the MP 40 for all soldiers, but by 1943, they’d started replacing both the MP 40 and the Karabiner 98k with the new StG 44. 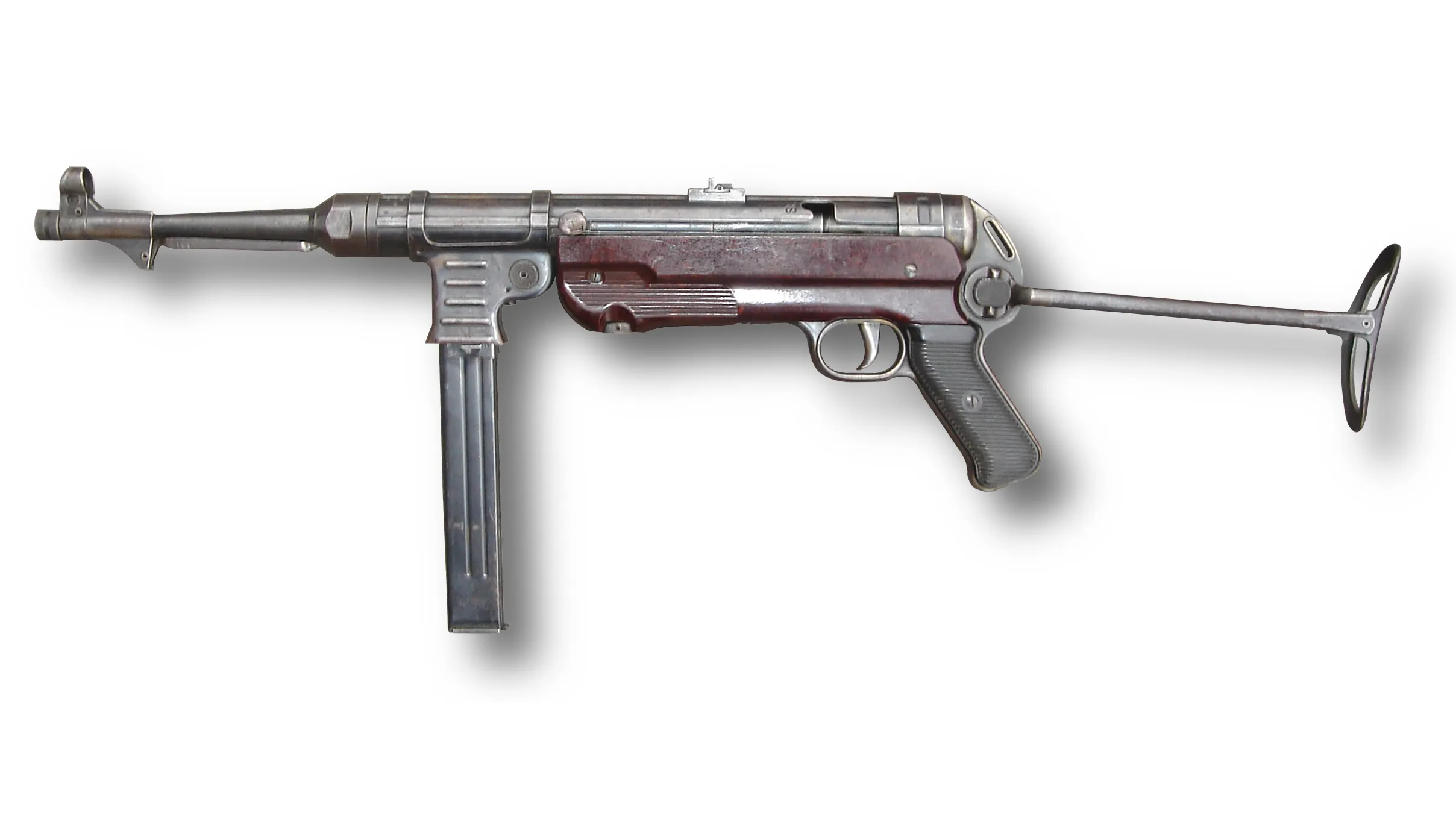 The MG 42 was a general-purpose machine gun used by the Nazi military during the second half of World War II and an excellent example of German engineering. The MG42 was cheap and easy to build, but also easy to operate and incredibly reliable. It fired an average of 1,200 RPM, well beyond what the Allies’ machine guns were capable of. 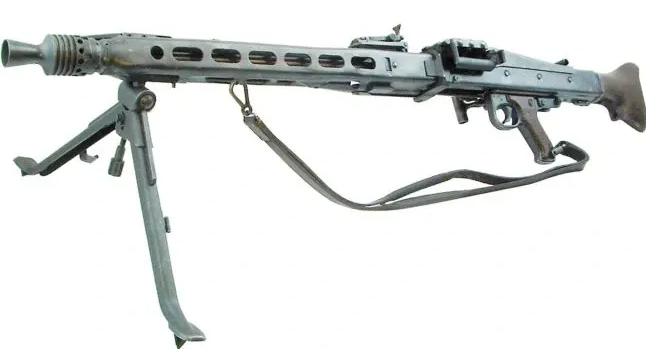 Though US troops actually used flamethrowers more extensively in World War II, the German Flammenwerfer 35 might be the war’s best known flame thrower. The FmW 35 had a range of up to 25 meters and was used to clear out buildings and trenches. 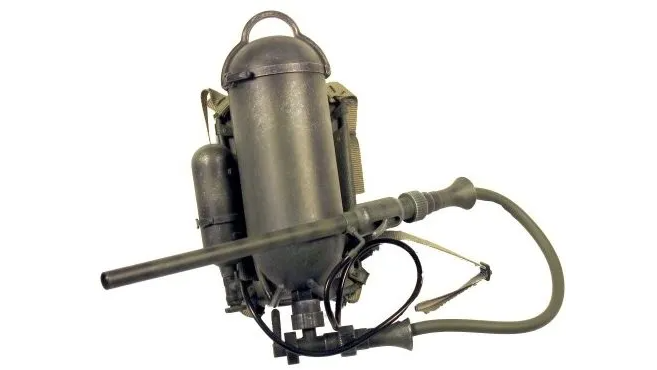 Let’s finish up our list with a couple Japanese weapons, starting with the Nambu pistol. There were actually two versions of the Nambu that were used during World War II, the Type 14 and the Type 94.
The Type 14 had a pretty good reputation, especially before the start of the war, and was the most produced of the two types. It was even the basis for Bill Ruger’s Ruger Standard Auto Pistol. Unfortunately, wartime production versions quickly dropped in quality due to strained resources.
Far less common was the Type 94, and thank goodness, because it was a terrible weapon. It was prone to malfunction in some very dangerous ways, leading American troops to nicknamed it “the suicide gun.” 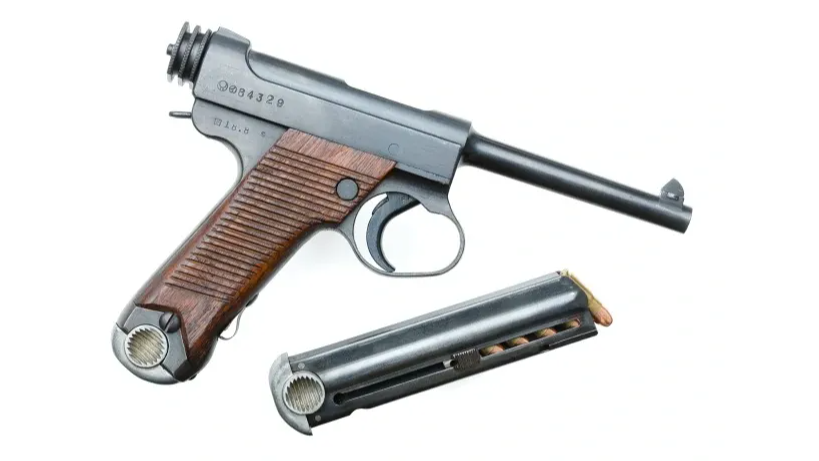 Finally, the Arisaka Type 99 rifle was the standard-issue bolt action rifle of the Japanese Imperial Army during World War II. It was made in several different versions, including a long rifle, short rifle, sniper rifle, and even anti-aircraft rifle. Much like the Nambu Type 14, the Type 99 started the war as a reliable-high quality weapon, but the strain on production quickly led to a drop in quality.

Feel like you are a part of history with Texas Gun Experience’s WWII Machine Gun Package. With this unique experience, you can try five of the top infantry weapons of World War II, the Browning M1919, M1918 Browning Automatic Rifle, MP 40, German MG 42, and Ithaca M3A1.

Chloe and Taylor were awesome in helping me to get our package scheduled and answer all of the questions I had!
The experience was awesome! The range safety officers were A+ and gave us a run down of all the guns, their historical significance, and instructions. The range and the entire facility is spotless clean and truly state of the art. Would highly recommend this package and will definitely be back soon!